One Vision ~ One Purpose ~ One Pickup

In 2008, the vision began when the unmet need was recognized.  Northern Neck Food Bank began in the back of a pickup truck by assisting area pantries with the transport of food from Central Virgin 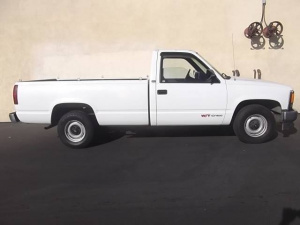 ia Food Bank in Richmond to the Northern Neck.  Simply put, people helping people.  That’s all it took for the vision to become a reality in 2010, two short years later in a small double storage unit in White Stone, with the same pickup truck. 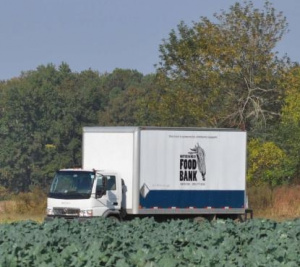 bank was serving 2,500 people through 11 pantries and distributed 696,000 pounds of food, a 45% increase in just two years.  This proved to be a pivotal point for the organization.  After implementing an online database connecting the pantries to the food bank distribution center, a survey of clients found that over a third of the households served had a member with Type I or II diabetes.  In response to this new data, the food bank immediately shifted its focus from simply feeding people to acquiring and serving the most nutritious food available.  Nutrition became the key to implementing the Agricultural Program, which quickly became the food bank’s signature program recognized across the country.

The Agricultural Program is designed to improve the nutritional value of the food distributed first to over 4,000 families in the counties of Lancaster, Northumberland, Richmond, Westmoreland, Middlesex and Essex. Fresh produce in excess of what is distributed locally is then distributed throughout Central and Southeastern Virginia, including the Eastern Shore. The concept is simple, farmers donate food, volunteers work, donors provide funds for transportation, Healthy Harvest Food Bank collects and delivers the food and our partnering pantries distribute the food to our clients in their time of need.  The program runs from mid-June through mid-December each year. We currently distribute 40-45% fresh produce every month to each food bank recipient, the highest percentage of fresh produce distributed through food pantries in the state of Virginia. 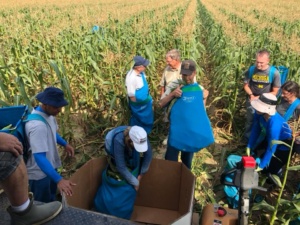 Significant change again came to the organization in 2013.  The need in the region was so great that a larger truck and warehouse space were necessary to continue operating efficiently.  The organization moved to its current location in Warsaw which housed an administrative area for the food bank’s four employees.  The move more than tripled the amount of storage space available and put the organization in a location central to the counties they served and the farms they used for gleaning and harvesting.  In 2014, the counties of Essex and Westmoreland, including Colonial Beach were added to the food bank’s distribution area and the year ended with a record distribution of 1.2 million pounds of food.  The next two years brought addition

al growth, new programs and a total distribution of 1.7 million pounds of food to over 8,700 people each month through 27 pantries.  The organization had again reached capacity in the current space.

In 2017 a record 2.1 million pounds of food was distributed to 12,765 individuals through 28 pantries in the Northern Neck and Upper Middle Peninsula.  The Agricultural Program thrives to the point of standing room only in the food bank’s current location during the summer months, but the operation runs like a fine oiled machine and the staff is dedicated to consistently providing fresh produce first to clients in the six-county service area and then to other communities in central and southeast Virginia, including the Eastern Shore.

Based on the success and recognition of the Northern Neck Food Bank’s goal of providing healthier food options, the mission of the food bank was officially changed at the beginning of 2017.  Their new mission is to provide healthy nutritious foods for those in need in the communities they serve.  With the new mission in place, the staff and board of directors then worked together to develop a new name that did not limit them to the location and region they serve but what they actually do in terms of providing healthier food options.  In early 2018 the Northern Neck Food Bank became Healthy Harvest Food Bank.

The name change reflects the evolving focus and standards of the organization. Based on the rate of growth and the development of new relationships throughout the region and beyond, it was time to explore name options that focus on what the organization does rather than where they are in terms of location.  The signature Agricultural Program is well known throughout the state making it the ideal focus for choosing a new name and effectively encompassing the organization’s goal of providing healthier food options to those in need. 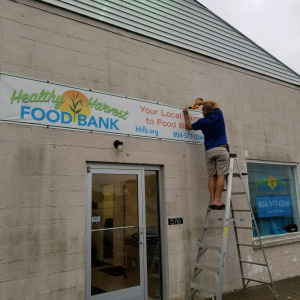 With five full-time staff, two part-time staff, three refrigerated box trucks, a pickup, SUV and ATV, the food bank operation continued in the same space in Warsaw through 2018 and most of 2019.  Having expanded beyond the location’s capacity for several years, a new facility became a necessity.

The food bank launched a capital campaign for a new facility to resolve the current space limitations and position the organization to meet future demand, distribute product more efficiently, continue to expand the agricultural program and provide future educational programs.  The new facility was completed in the fall of 2019, housing 10,000 square feet of dry storage, including over 2,000 square feet of cold storage and an additional 3,000 square feet of office space and multi-purpose center for meetings, training and future educational programs.  While the organization has experienced an extraordinary level of growth, they continue to explore what’s next and how they can be at the center of change for future generations.  The concept will always remain simply people helping people.